What About the Gomez Bible? (English) – by Jeff McArdle 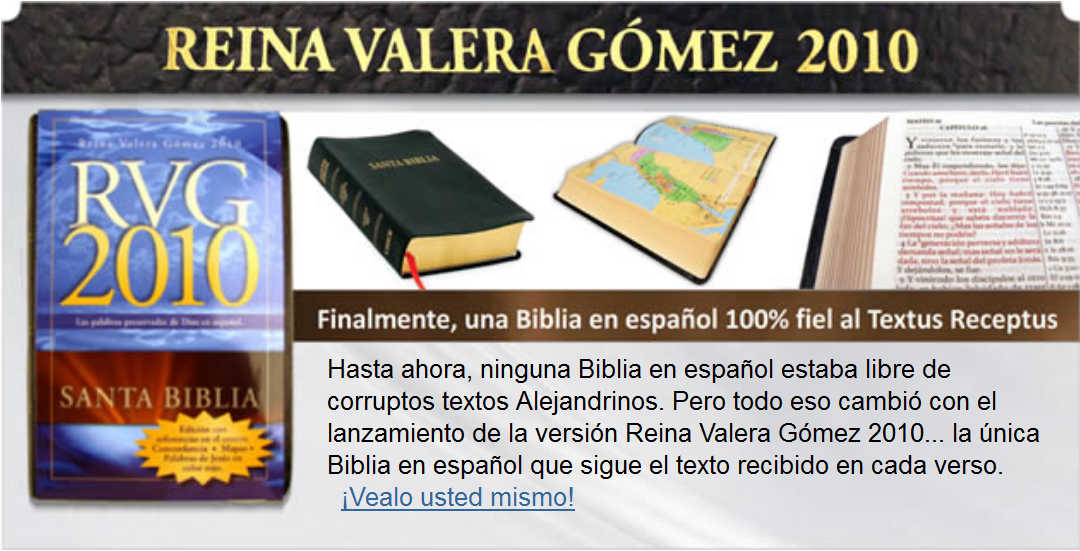 This is the advertisement put out by the Gomez organization listing “Dr.” (unearned title he plastered 4 times in his bible) Gomez’ website and advertising his bible. He says that it “reads like the beloved English King James Version.” This of course is an “untruth” and in this tract and subsequent tracts we will document the reality that, far from reading like the KJB, the Gomez bible in fact corrupts the original Valera 1865 Bible against the King James.

To be clear about this, the reader should note that Gomez claims to have “revised” his bible based solely on the 1909 Valera bible [see Editor’s note at the end of the article]. Though this may be true, we shall document in this series of articles that he many times went with the 1960 reading against the KJB and against every other Spanish Bible ever produced. But even if it were true that he only relied on the 1909, why begin with a text that was purposely lined up with the Westcott and Hort corrupt critical text (see documentation at the end of this article), against all attempts by Latin American Christians to keep their beloved Valera Bible pure?

They come to me and ask, “And what about the Gomez Bible?” I’ll cite the history. In 2002 Mickey Carter held a Spanish Bible Conference for the purpose of, said he, “Coming to a consensus on the correct Spanish Bible.” Present and accounted for were 4 groups, 3 of which claimed to be in the PROCESS of producing the correct Spanish text (Gomez, Monterey and the TBS). Only one of the groups claimed to already have it.

We, the Valera Bible Society, believe and affirm that die Spanish speaking people have had the correct text for 400 years. We, the Valera Bible Society, believe that God speaks Spanish, and we further believe that having 3 distinct and CONCURRENT groups, ostensibly purifying the text is disorder, confusion and blasphemy. The Gomez Bible has been revised 5 times since 2004 [editor’s note: 7 times by 2010]. Confusion!

The other 3 groups are NOT producing anything remotely resembling a PURE text because they are all using a text (the original Valera) that THEY say is NOT pure as the basis for their revision. Question: If it is NOT pure already, then why use it as the basis for a revision? Answer: They are too lazy to produce their own Bibles. So they have taken other men’s work and put THEIR name on it. This is called “stealing”.

To add insult to injury, one of these groups (Gomez) now claims that his text reads “like the beloved King James English Bible.” How would that help a man in Bogota or Havana? THEY DONT SPEAK ENGLISH IN LATIN AMERICA! Sure, we know what he is trying to say. But what is shameful is that no matter how you look at what Gomez is saying, it is NOT true. I am going to list right here 8 verses where Gomez’ bible does not match the KJB. Eight verses where the KJB equivalent was already present in the original Spanish Bible in 1865 or even further back in 1602. Question: What right does Gomez have to change the Spanish Bible and remove words that were correct at least 100 years before he was born and then claim that his Bible reads like the “beloved King James English Version”? I am going to list only 8 out of the hundreds of verses that have become glaringly obvious in just a few cursory perusals of his text.

I have not decided yet when we are going release the hundreds of other corrupt verses in the Gomez bible (though anyone could easily find them if they would take the time to study). Perhaps we’ll wait for each of his subsequent revisions (he has already revised it 5 times in 5 years). Why continue this game of musical chairs when his people have already had the Scriptures for more than 400 years? Confusion!

Here are the first 8 and then I’ll answer the previous question for the reader. Understand, we are pointing out that he is less than honest when he states that his bible is the King James in Spanish. Some people call this an untruth. Others call it an “unfortunate statement.” We’ll be charitable and call it a lie. (Note: in almost each of these verses, the “Gomez” bible lines up with the 1960 and against the original 1602 and against the KJB):

(Comment: The word “life” [“vida”] is actually removed twice by Gomez, because the direct object pronoun “la” is also removed in Spanish, referring directly to the word life). [Editor’s note: this glaring omission has since been “fixed” in the Gomez project’s ever-changing process of fixing all of the errors in their corrupt “Bible” that we discover for them.]

(Comment: This is a direct reference to Jesus Christ. The words are in every text – English, Greek and of course the Spanish – for 400 years). [Editor’s note: this error has since been “fixed” as part of the ever-changing Gomez edition process.]

(Comment: Obviously there is no such place as purgatory, with fire to “purge,” if the blood of Christ is what does the purging. The Gomez says to “clean” or even “purify” (limpiar). But it does NOT say “purge.” This is sloppy revision work by a man [Gomez] who is trying to reach Catholics in Mexico when the Valera has been correct for over 400 years!)

(Comment: Anything we can do to help out the two faced hypocritical Christians and preachers in America who have a problem with the TONGUE!)

(Comment: Christ Is “working” in me – Phil 2:13 and I Thes. 2:13! Is He “working” in you?) [Editor’s clarification: “eficacia” basically means “effectiveness” in this context, and the Gomez reading removes the “working” that the RV1865 correctly retains: “operación”.]

(Comment: The devil will use you, abuse you and then lose you. Christ will use you, care for you and then glorify you! Amen!) [Editor’s clarification: by leaving out the words “los usos”, the Gomez simply states that you are “useful” to the Lord. This glaring omission has since been “fixed” by the ever-changing Gomez editions.]

(Comment: Corrupt W & H Greek text is the reason for this change, and the difference between the words “cerca” [besiege] and “asedia” [bother]).

(Comment: This verse has been correct for more than 400 years. Why does our good “Dr.” wait until 2004 to take Jesus Christ out of the verse?) [Editor’s note: this verse has also been “corrected” in a subsequent printing/revision/edition of the Gomez.]

I was participating in a missions conference in Texas in 2004.1 received a call from Mr. Gomez, who asked me to meet him for breakfast at the Laredo Dennys. In that meeting he invited me to the “unveiling” of his new Bible.

This meeting was to be in Milton, Florida at Victory Baptist Church (Jim Fellure [pastor Tim Fellure]). At that meeting he also told me that the old Valera 1865 was absolutely correct. So I asked, “Why change it then?” His answer: “Well there are some words that I prefer over others.” And that is the heart of the problem when it comes to the word of God in any language. The human heart is so dark that men are willing to change “what God hath wrought’’ for their own preferences.

I went to the meeting in Milton, Florida with Mr. Gomez. One good thing I got out of that meeting was that I am the “proud” owner of the very first Gomez NT ever to come off the press, complete with Mr. Gomez’ autograph. It is his Bible after all (he holds the copyright)!

Gomez invited me to that meeting but he never gave me a chance to speak. After I had refuted thoroughly any of his preferences [previously, in private], he proceeded from the pulpit to attack the readings of the old Valera 1865, even after I had showed him he was wrong according to what God has stated in His word! Oh the human heart is a tricky thing, is it not?

What are these preferences that Gomez is so worried about? One of the verses that Gomez spoke of at the meeting on Nov. 30, 2004 was Psalm 68:11 which he says is an erroneous reading in the original Valera:

The words “las evangelizantes” (which translated means simply “evangelists”, feminine gender [“those {females} that evangelized”]), seem to give the impression, to the casual reader, that those who are charged with the preaching of the gospel are women. In other words, the ones publishing the “palabra” (word) are women (though the word “women” does not appear in the text in Spanish). Theses words are obviously the correct translation for the word in Hebrew t o r c k m h (feminine gender, hamesaberoth). These words are feminine in Hebrew, feminine in Spanish, and feminine in English, because the passage tells you that women are involved (v. 12 states that the words in the 1611 “of those that published it” refer to “she that tarried at home divided the spoil”).

Now I realize that Psalm 68:11 as it stands in English makes great preaching and can be used as a great moniker for a Bible printing ministry. But changing a verse that deals doctrinally with the 2nd advent in order to suit your own preferences is not wise. The verse as it stands doctrinally refers to the female prophets of God in the OT who prophesied of the 2nd coming of Jesus Christ. (Please note Ex. 15:21, Judges 5, and I Samuel 2.) Interestingly enough, Valera himself made reference to these verses in the footnote found alongside Psalm 68:11 in his original 1602 Bible. Additionally, if the spiritual application were made known here, the argument could easily be made that those who are charged with preaching the gospel of the Lord Jesus Christ in this age are the churches. The church is the bride of Christ and as such is female. No matter how you apply this verse it is correct as it stands in the original 1602 Valera Bible.

The following documented quote shall serve as proof positive that the 1909 Valera Bible revision committee based their revision on the wrong text: “In December (1907) the committee proposed [that the] Greek basis be Westcott and Hort, with the English Revisers Text [RV of 1881] and Nestle,” Text and Translation: European Languages, Essay #16, Part V, D, Eric North, ABS, April 1967, p. 36. Conclusion: Gomez based his revision on the wrong text. The same article goes on to state that the missionaries and native Spanish speakers were against the revision and the corrupt Greek text they used: “…a group of missionaries in Buenos Aires question the use of Westcott and Hort and Nestle Greek Text but Versions Committee does not change,” (Ibid., p. 42). Welcome to Laodicea!

[Editor’s note: Dr. McArdle’s original article makes the statement “Gomez claims to have ‘revised’ his bible based solely on the 1909 Valera bible”. Due to the unbelievable amount of varying and contradictory claims made about the RVG’s production process, both by its revisors and publishers, and supporters not directly involved with the project, it’s impossible to know if this claim was actually made or not. For that purpose, we would redact the statement, yet for honesty’s sake we simply add this clarification to {hopefully} forestall any false accusations.]